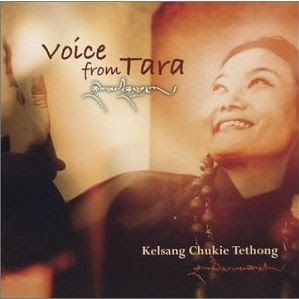 otros mirrors: DESCARGAR
192 kbps mp3 - no booklet - Thanks to unknown

Quote:
Considered the finest Tibetan folk singer of her generation, Chukie Tethong spent 11 years at the Tibetan Institute of Performing Arts in Dharmsala, India, learning songs and technique from elders who once sang freely in Tibet, before the Chinese invasion in 1959 - including the late, legendary singing master Lhutsa and Majlhama.

She formed the group Gang Chenpa with her sister Namgyal Lhamo and the itinerant singer Tobden Tyamtso, who they met during the filming of Seven Years In Tibet. Their music appears extensively in the film and that collaboration cemented a commitment to preserve the vitality of true Tibetan folk music - love songs, mountain songs, songs that people used to sing while working in the field or in their workshops...a song tradition that is vanishing from their exiled culture, and from the world.

On this solo album, Chukie's gentle voice relaxes, enveloping the listener with a Tara-like loving and endless kindness.

Quote:
Kelsang Chukie Tethong is working to preserve the traditional music of her native Tibet. Like many Tibetans, she lives in exile because of the Chinese takeover of the country in 1959. With her sister Namgyal Lhamo and singer Tobden Tyamtso, Tethong was part of the musical group Gang Chenpa, but Voice from Tara is a solo recording.

The review copy of this CD unfortunately did not include any information about the context of these songs: Where in Tibet did they come from, what do the texts mean, what people sang them? So one can only judge the music itself. Titles like "The Mantra of Kwan-Yin" and "Avalokitesvara" indicate that at least some of the songs are Buddhist devotional songs and mantras.

Tethong has a beautiful voice. She is supported by western instruments like piano and violin on this album. The setting is certainly not the traditional way these songs would have been heard; it's analogous to a classical arrangement of European folksongs. Still, Tethong's voice is the real draw here. She could sing all of these cuts solo and be equally riveting. The drum tracks and percussion on a cut like "Face of Champa" are inessential. Tethong's voice hovers over the backing instruments and draws the listener in. On tracks like "Chang Hogmun," she sings in an almost yodeling style, but this is an exception. She has one of those voices that could sing the telephone book and have the listener asking for more.

Voice from Tara is far from a field recording, but it will give a taste of Tibetan music to the interested listener. Its contemplative feeling will also please fans of new age music.